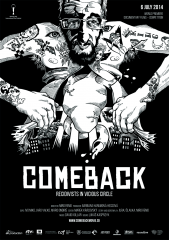 Coming out of the prison two recidivists evaluate their past and look into the future outside of jail. Once out, they fight with the reality of life, trying to survive before it is too late. Can somebody find a solution?

Time in one of Slovakia’s most guarded prisons, where most of the prisoners return regularly, passes very slowly. Two recidivists evaluate their past and look into the future as the time of their release approaches. How does the whole process look and what awaits Zlatko and Miro outside of jail after many years? Once out, they are empty-handed with no education and a criminal record. A complicated family background and no friends acting as positive models giving them a chance to integrate into normal life. Baffled, they observe what’s new on the outside – women, cars, fashion, smart phones – everything has changed, but they remain the same. Will they be able to start from scratch and is it safe for the society? How much can a mother of a jailbird handle? Is the judicial system fair enough? The story of repeat criminals’ reintegration and being trapped in a vicious circle.

Comeback is a feature documentary film from behind bars with a topic of comeback to freedom and back again. From a social and societal point of view, recidivism is the biggest problem of the prison system. A vast majority of those who get out of prison commit another crime. In the most maximum-security prison in Ilava it’s no different, with 90% of inmates who get out returning to the institution. Being let out of prison after serving a term of 10 years or more is an enormous change. Several thousand days of a long-term, daily prison routine suddenly ends and the inmate is once again free. The return to society is very difficult – prison and freedom are two absolutely different worlds. Those ten or twenty years, usually the productive years of a person’s life, have vanished. They leave the prison and essentially have nothing. Things that seem normal and ordinary to people on the outside present a big problem to the ex-convict. They don’t have anywhere to live or work, don’t have clothes or food, and after getting out have no idea even where the bus stop is.

The movie offers several topics: questions of guilt; warped sexuality; complicated family relationships; an absurd judicial system and the lack of a systematic socialization process; personal despair; and the inability to reintegrate into society. The film tells about a topic that has the ambition to open wider social debate. Offers a reflection on how and whether it is possible to deal with this issue.

Production and distribution of this film was supported by Slovak Audiovisual fund.

With financial support of Ministry of Culture of The Slovak Republic.

Behind The Scenes Photos